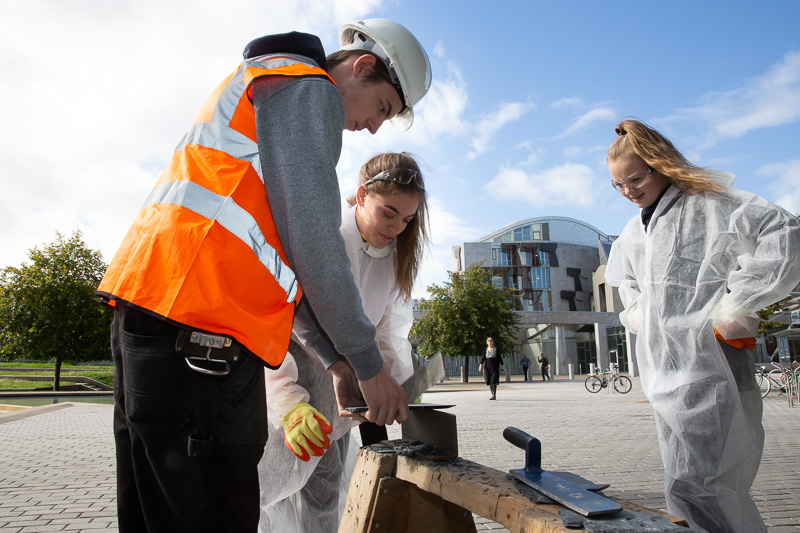 The hands-on practical workshops provided 13 to 15 year olds with the chance to discover more about traditional skills apprenticeships, and allowed them to have a go for themselves.

They tried their hand at stonemasonry, roof slating, joinery and painting and decorating, expertly assisted by current Modern Apprentices in these trades.

The event was sponsored by Gordon Lindhurst MSP for Lothian. He said: “Traditional building skills demonstrations are hugely valuable in raising the profile of the vital skills needed to maintain our unique built heritage.

“Having attended workshops elsewhere, I am delighted to welcome the Scottish Traditional Building Forum and the Construction Industry Training Board to the Scottish Parliament, alongside the apprentices who can show off their skills.

“I hope that by raising the profile of these traditional building skills in this way we can secure the long term future of Edinburgh’s World Heritage Site and Scotland’s built environment more generally.”

The event was organised by the Scottish Traditional Building Forum as part of Construction Scotland’s, Inspiring Construction programme. It was supported by a range of partners including CITB, City of Glasgow College, West College Scotland, Dundee and Angus College, Edinburgh College and Developing the Young Workforce.

Ian Hughes, Partnerships Director at CITB Scotland, said: “What better way to encourage young people to consider a career in the traditional skills side of construction than to invite them to give it a go for themselves. With the Scottish Parliament as the backdrop to this event, I hope the school children feel truly inspired to think of construction as a varied and exciting career choice.”

Ken Gillespie, Chair of Construction Scotland said: “The construction industry currently employs 233,600 people, but it’s estimated that 28% of that workforce will need replacing by 2027, creating at least 21,000 vacancies. Attracting more potential employees to our industry to address this imminent skills gap is one of Construction Scotland’s top priorities.
“These Traditional Building Skills events are part of our Inspiring Construction programme, which aims to attract more school leavers to the sector by informing young people and their parents, teachers and career advisors about the huge and diverse range of careers available in construction, and importantly, how to access them. From professions like architecture, engineering and surveying to the more traditional trades like joinery and stonemasonry, this industry has something to suit everyone.”